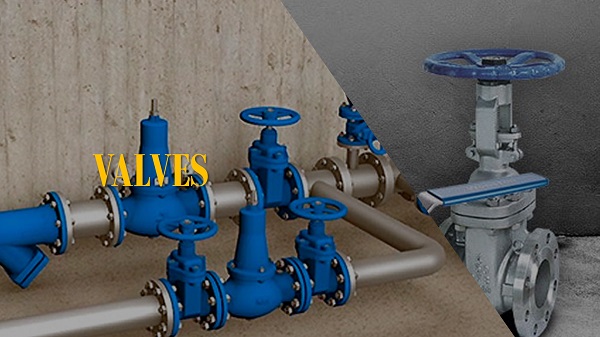 Valve is a device or natural object that regulates, directs or controls the flow of a fluid (gases, liquids, fluidized solids, or slurries) by opening, closing, or partially obstructing various passageways. Valves are technically fittings, but are usually discussed as a separate category. In an open valve, fluid flows in a direction from higher pressure to lower pressure. The word is derived from the Latin valva, the moving part of a door, in turn from volvere, to turn, roll. Valves have many uses, including controlling water for irrigation, industrial uses for controlling processes, residential uses such as on/off and pressure control to dish and clothes washers and taps in the home. Even aerosol spray cans have a tiny valve built in. Valves are also used in the military and transport sectors. In HVAC ductwork and other near-atmospheric air flows, valves are instead called dampers. In compressed air systems, however, valves are used with the most common type being ball valves. This Database was designed to perform Valves Cost Estimates, based on generic cost curves for several Activity families types generated using benchmarking techniques. The benchmarked curves give Mhrs and Cost information as a function of a capacity variable or combination of variables. The cost curves and other information contained in this application can be used to develop the overall process plant capital cost.
PA1400 - VALVES

All rights reserved. No part of this publication may be reproduced, distributed, or transmitted in any form or by any means, including photocopying, recording, or other electronic or mechanical methods, without the prior written permission of the publisher, except in the case of brief quotations embodied in critical reviews and certain other noncommercial uses permitted by copyright law. For permission requests, write to the publisher, addressed “Attention: Permissions Coordinator,” at the address below.

Copy Protected by Chetan's WP-Copyprotect.
We use cookies to ensure that we give you the best experience on our website. If you continue to use this site we will assume that you are happy with it.Ok